Into the Flames is a roleplaying game about a haunted journey, specifically designed to be played in front of a campfire.

As a group you tell the story of a pilgrimage along an accursed road. Each player takes on the role of one of the pilgrims and over time uncovers their reasons for travelling - whether hoping to find treasure, escape persecution or experience religious epiphany.

Only one of the pilgrims will make it to the end of the road. The others will be picked off, one by one, by the spirits that follow your every step. They lurk at the edges of the flames, greedy for tribute.

Each night we will cast our offerings into the flames - a locket given by a former love, the sword that protects us, our meticulously kept diaries. We hope that what we offer is worthy. If not we will be culled, claimed into the ranks of the ghosts to haunt our former companions.

Into the Flames is designed to be played over 1-3 hours without a GM. The 38 page rulebook contains all of the instructions for play. It can be played as a LARP around a campfire or as a traditional roleplaying game, in-front of a fire or around a table of candles. The rules are designed to be read as a group, with a simple character generation to get you playing quickly.

Any payments over $12 also get you the trinket cards - an additional resource for the game. They are not necessary for play, but allow you to skip finding or bringing your own trinkets to offer to the flames.

In order to download this storygame you must purchase it at or above the minimum price of $10 USD. You will get access to the following files:

Support this storygame at or above a special price point to receive something exclusive.

A PDF of Into the Flames available for backers from marginalized backgrounds or who can't otherwise afford the game. Please take one, no questions asked.

Into The Flames Is a spooky campfire rpg.

That is to say, it's specifically designed for play around a campfire, and it's also eerie and intimate, spooky and somber, and either phantasmagorical or bleak.

The PDF is 38 pages, with stark, intense art and layout, and it fully commits to the game's campfire setup. You can optionally choose not to use the mechanics where you play by throwing things into the fire, but it's a great somatic component if you use it, and the game also sort of asks you to trek into the woods somewhere, set up a campsite, and play spontaneously---which I think could be extremely cool, if you've got a way of doing that without risking setting anything else on fire.

Mechanically, Into is a bit like a larp. You don't roll dice. You offer objects to the spirits (the GM) and they decide whether to accept and let you burn the object, or to claim you instead. In between offerings, you chat with others and establish characters.

You probably do want a large-ish group for this, somewhere between 6--12 people. The spirits can empty a whole fire of PCs in a single round if they feel like it, and how aggressively the group can be whittled depends a lot on how many people are playing.

You *could* honestly get really solid gameplay out of a run where no one is taken until the very end, though, so large group size isn't a hard and fast requirement---and you could also theoretically do a variant where multiple people survive, or even the whole cast does, depending on the atmosphere you're going for.

Overall, I think this is a heck of a game for spooky autumnal storytelling, and I think it gets kicked up a further notch if you make costumes (especially for the spirits) and do some world-building in advance.  By its nature, Into's setting feels oppressive and empty, and you could make your game about anything from Dark Souls to fimbulvinter to Metro to a gothic fantasy country plagued by the dead and bandits and other, less definable, entities.

If you don't like horror or dark atmospheres, a little bit of hacking can lighten the mood (I think it would work just fine for adventurers delving into a dungeon or knights questing for a grail), but if what you need is dice mechanics this doesn't really provide that. Reading through the PDF may be good inspiration for a scenario or campaign world, though, and if you're on the fence I think it's worth a look.

-Page 4, "it will the sacrifice will be worth it" remove 'it will' 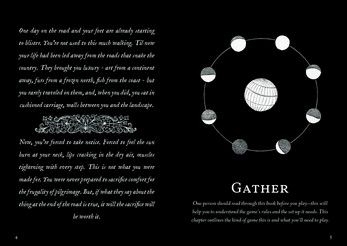 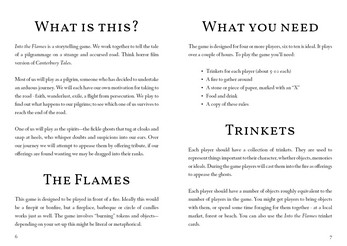 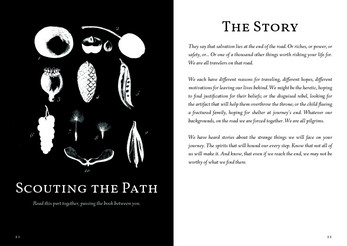